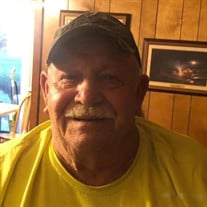 Mr. William "Bill" Harrold Carver, age 80, of Ripley passed away Sunday, January 16, 2022, at Jackson General Hospital of Jackson, TN. Mr. Bill was born August 19, 1941, in Halls, TN. He is the son of the late John Sherman and the late Eva (McCleldon) Carver. He was inducted into the US Army November 17,1959 and was honorably discharged October of 1965. He was employed as a construction worker. Mr. Bill is survived by: Barbara Christine Carver, two daughters: Beverly Dunavant of Henning, TN, Sandra Carver of Ripley, TN, one step-daughter, Peggy Gains of Ripley, TN, and one son: Bobby (Tammy) Carver of Ripley, TN. He also leaves behind nine grandchildren and seven great- grandchildren. Mr. Bill was preceded in death by one brother and two sisters. The funeral will be held 1:00 pm on Friday, January 21 at Halls Funeral Home, 109 N. Church St., Halls, TN with Bro. Brent Willis officiating. Burial will be in Dry Hill Cemetery, Gates following the service. Calling hours will be Friday, January 21 from 11:00 am until 1:00 pm at Halls Funeral Home, An online guest book is available online at www.hallsfh.com .

The family of Mr. William "Bill" Harrold Carver created this Life Tributes page to make it easy to share your memories.

Send flowers to the Carver family.