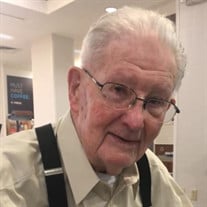 The Good Lord took another son, Roy Haden Williams Jr., home on October 31, 2021. Roy was born on March 20,1923, to Effie Perry Williams and Roy Haden Williams Sr. From the start, Roy was an animal lover and outdoorsman. By the age of six, he was hunting, fishing and plowing with a mule! Roy had a natural mechanical ability and a wonderfully creative mind. He created his own coffee pot on a timer before Mr. Coffee got his to the market! Few of his personal possessions escaped some sort of tweaking to make them perform to his standards. He also brought several innovations to the Army Corps of Engineers which they gladly employed on their barges. When war was declared, Roy enlisted in the Marine Corp and served in the Pacific Theater. He had many tales about his experiences during that phase of his life and was very proud of his service to his country. Upon his return to Tennessee, Roy began working for the Army Corps of Engineers where he served until retirement. More importantly, after the war Roy met and married the love of his life, Minnie Zell Gilliland. Their marriage lasted 74 years, until her passing in 2020. They had two daughters, Lana Koontz and Cathy Pierce. When Roy and Minnie Zell began to need to live closer to family, they moved to Madison, Wisconsin, and then to Virginia Beach, Virginia. The biggest bonus for moving to Virginia came in the form of a wonderful relationship with his namesake, Haden Lacy. This year, he was able to welcome his second great grandson, Callan Lacy, into the world. He leaves behind his daughters, Lana Koontz of Virginia Beach, VA and Cathy Pierce (Jay) of Easton, MD, and four grandchildren: Bryan Koontz in Winnipeg, Canada; Jason Koontz (Cara) in Colorado Springs, CO; Leanne Koontz (Jerritt) in Virginia Beach, VA; and Ethan Koontz (Jennifer) in Baltimore, MD as well as his two great grandsons, Haden and Callan. He is also survived by two nieces and one nephew. Visitation will be held Saturday, November 6, from 10:00-11:00am, at Halls Funeral Home, Halls, TN. The service will immediately follow at 11:00am at the funeral home. Trent McManus will officiate, with the Fincher Family offering praise in song. In lieu of flowers the family requests that donations be made to St. Jude’s in Memphis

The Good Lord took another son, Roy Haden Williams Jr., home on October 31, 2021. Roy was born on March 20,1923, to Effie Perry Williams and Roy Haden Williams Sr. From the start, Roy was an animal lover and outdoorsman. By the age of six,... View Obituary & Service Information

The family of Mr. Roy Haden Williams, Jr. created this Life Tributes page to make it easy to share your memories.