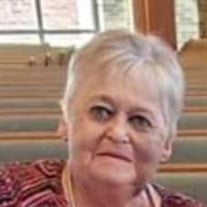 Nancy Carol Hargrove Thrash, age 74, died on September 1, 2020 in Ripley, Tennessee. Celebration of Life to be held at Halls Funeral Home, September 6, at 3 o’clock with the Rev. Barbara Blackmon-Fortune officiating. Mrs. Thrash was born on January 28, 1946 in Brownsville, Tennessee to the Lt. Col. Grady Thomas Hargrove and Dorothy Louise (Wood) Hargrove. She traveled extensively in her youth as part of an active military family. She eventually continued the adventure as she met and married a US Marine, the Major Ronald Jess Thrash. She enjoyed travel throughout her life, from her childhood years spent in places such as Puerto Rice to Turkey, to camping trips to the mountains, and trips to beaches as a young mother. Early retirement years added to the adventures with many cross-country motorcycle trips with her husband. She was an active part of her children's lives, actively attending ball games, dance recitals, and band competitions. She was a proud Band Mom of the 1984 state champion Golden Tiger Band to whom she was known lovingly as “Little Mama”. She continued to serve actively as she became a grandmother, serving as prop mistress for productions at Ripley High School. Mrs. Thrash is preceded in death by her husband USMC Major Ronald J. Thrash, to whom she was always faithful “Semper Fi”, her parents, Grady and Dorothy (Wood) Hargrove, and brother Tom Wood Hargrove. She is survived by her sister, Bette (Ken) Davis of Rio Rancho, New Mexico, her son, USMC L/Cpl.Todd (Dianne) Thrash of El Indio, Texas, daughter, Kelly Thrash of Jackson, Tennessee. Loving Mawmaw to Mikayla (Kyle) Haggard of Mobile, Alabama, Christopher Thrash of Mathis, Texas, Matthew Williamson of Jackson, Tennessee, and Cheyenne Thrash if Lubbock, Texas, and Great Grandmother to Alexander Haggard. Nieces and nephews include Casey (Eric) Hansen of Happy Valley, Oregon and Evan (Rebecca) Davis of Arlington, Virginia. Internment will reunite Mrs. Thrash with her husband at Arlington National Cemetery. In lieu of flowers, please a donation to Exceptional Worship or The Veterans' Museum.

The family of Nancy Carol Thrash created this Life Tributes page to make it easy to share your memories.

Send flowers to the Thrash family.