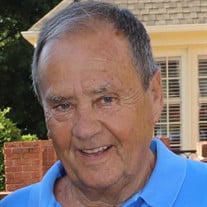 Jerry Wayne Buckner, age 77, of Ripley passed away Wednesday, February 16, 2022 at Brook Dale Oaks of Jackson, TN. Jerry was born May 13, 1944 in Dry Hill, TN. He is the son of the late Elic Buckner. He is survived by his wife: Donna (Honey) Buckner, one daughter: Cindy (David) Ream of Ripley, TN and two sons: Jeff (Ann) Buckner of Dyersburg, TN and Craig (Beth) Buckner of Murfreesboro, TN, he also leaves his mother Louise (Burns) Buckner; two sisters: Carolyn Horner of Halls, TN and Anita Cullum of Ripley, TN, and two brothers: Jim Buckner of Ripley, TN and Mike Buckner of Halls, TN. Jerry also leaves 8 grandchildren and 3 great-grandchildren. Jerry was married to Donna Honey Buckner for 41 years and has lived in Lauderdale County his entire life. Before graduating from Halls High School, he started his sales career at Halls Hardware. He served in the Tennessee Air Guard from 1966 to 1972. Jerry sold cars for several years at Carlton Chevrolet before opening his own used car business, Ripley Auto Sales. He spent many years building and racing sprint cars and stock cars. Later, Jerry was the store owner and operator at Mickey’s Superette for 12 years. He was elected Lauderdale County Assessor of Property in 2004 where he served two terms and enjoyed meeting the citizens in our community. He never met a stranger, and he loved sharing stories and making connections with others. After retirement, Jerry helped oversee operations at West Tennessee Expediting with his eldest son, Jeff Buckner. He enjoyed watching Nascar and supporting Ricky Stenhouse, Jr. He was proud to watch his grandchildren on the football field, basketball court, soccer field, baseball field, and baby crawling contest. Every morning, Jerry started his day with breakfast at Emilee’s with his group of best buddies. We are thankful that he was able to see two of his grandchildren get married this past summer. He loved being at home in his recliner, sitting in the driveway watching the big trucks drive by, and mowing the yard. Most of all, he was happiest spending time with his wife, 3 children, 8 grandchildren and 3 great-grandchildren. The Funeral will be held Sunday, February 20, 2022 at Halls First United Methodist Church at 3:00 pm with Bro. Zack Bennard and Bro. Bobby Jacobs officiating. Burial will follow in Ripley Memorial Gardens. Calling hours will be Sunday, February 20, 2022 at Halls First United Methodist Church from 1:00 pm till 3:00 PM.

Jerry Wayne Buckner, age 77, of Ripley passed away Wednesday, February 16, 2022 at Brook Dale Oaks of Jackson, TN. Jerry was born May 13, 1944 in Dry Hill, TN. He is the son of the late Elic Buckner. He is survived by his wife: Donna (Honey)... View Obituary & Service Information

The family of Jerry Wayne Buckner created this Life Tributes page to make it easy to share your memories.

Send flowers to the Buckner family.