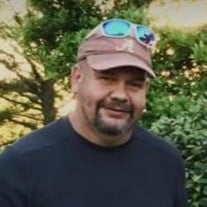 David Kelly Stallings, 45, passed away on Friday, April 15, 2022. David was born on April 30, 1976, in Dyersburg, TN, to David Clyde “Bubba” and June Ann Kelly Stallings. He graduated from Halls High School in 1994 as Class President and was voted Mr. HHS and Most School Spirited by his classmates. He played varsity football and baseball all four years and added varsity basketball his senior year. He obtained his Bachelor of Science and Master of Business Administration degrees from Bethel University while working full time and raising his daughter, Sophia. David took special pride in being responsible for the restoration and upkeep at Parr Cemetery in Halls, TN, and enjoyed camping, boating, swimming, and hunting. He loved training his dog, Sadie, and watching Alabama football with his parents. Above all else, he was most proud of his daughter and loved spending time with her. David is survived by his daughter, Sophia Ilene Stallings, 18, of Halls, TN; his parents, Bubba and June Ann Stallings of Halls, TN; his sister, Kathlene (Peter) Poulelis of Hernando, MS; his grandmother, Jerre “Muzzie” (Wymon) Stallings of Halls, TN; and his step grandmother, Mary (Coach C.M.) Kelly of Ripley, TN. Funeral services will be 2pm Tuesday, April 19,2022 at Halls Funeral Home 109 North Church St. Halls Tn 38040 with Brother Tim Buffaloe officiating with burial in Lebanon Cemetery. Visitation 12pm till 2pm Tuesday at Halls Funeral Home.

The family of David Kelly Stallings created this Life Tributes page to make it easy to share your memories.

Send flowers to the Stallings family.