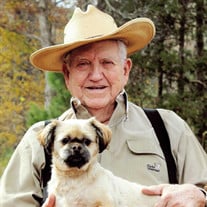 Mr. David Oneal Gitchell, 91, of Ripley, TN. passed away on Saturday, March 9th, 2019, surrounded by family and friends at Bailey Park Community Living Facility in Humboldt, TN. He was just 2 days away from celebrating his 92nd. birthday. He... View Obituary & Service Information

The family of David Oneal Gitchell Sr. created this Life Tributes page to make it easy to share your memories.

Send flowers to the Gitchell family.