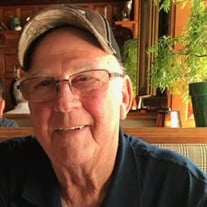 Mr. Dallos Wayne Burrough, age 74, of Halls passed away on Wednesday, October 14, 2020 at home in Halls. Dallos was born June 7, 1946 in Barr, TN. He is the son of the late Theron “Sebo” Eldridge and the late Lucille (Hardy) Burrough. Mr. Dallos proudly served his country as a United States Marine during the Vietnam War. He was a farmer, cattleman, landowner and dedicated father and grandfather. Mr. Dallos also retired from Crop Production Services in 2016, however, he continued farming until his health failed him. He was preceded in death by his wife, Gloria Garrett Burrough, who passed in January of 2019. He is survived by a daughter: Amanda (Brian) Wright of Germantown, TN and a son: Chris Burrough of Halls, TN; Brother of five sisters: Teresa Chisholm of Halls, TN, Maxine Hardy of Gates, TN, Ann Swims of Halls, TN, Virginia Hurt of Halls, TN and Alecia Wagoner of Aiken, SC. Mr. Dallos is also survived by two granddaughters; Katie and Erika Wright of Germantown, TN. He was also preceded in death by his sister; Lawanna Walker, and brother, Owen D. Burrough. The funeral will be held 2:00 pm on Saturday, October 17 at the Poplar Grove Cumberland Presbyterian Church, 492 Church Rd., Halls, TN with Rev. Melvin Orr officiating. Burial will follow in the church cemetery. Calling hours will be Friday, October 16 from 3:30 - 7 p.m. at Halls Funeral Home, 109 N. Church St., Halls, TN. In lieu of flowers memorials may be made to the Poplar Grove Cemetery Fund or the donor’s choice. Due to COVID-19, social distancing and mask are recommended. An online guestbook is available at www.hallsfh.com .

The family of Dallos Wayne Burrough created this Life Tributes page to make it easy to share your memories.

Send flowers to the Burrough family.