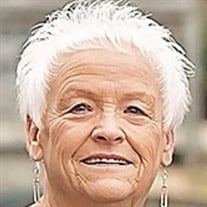 Barbara Sue Lovelace Ezekiel March 9, 1945-October 28, 2021 Barbara Sue (Lovelace) Ezekiel, age 76, died Thursday, October 28, 2021, in Germantown, Tennessee. She was born March 9, 1945, in Crockett County, Tennessee to the late John Robert and Martha (Sumerlin) Lovelace. After graduating from Crockett High School in Maury City in 1963, she married the love of her life, the late Lynn Ezekiel in August, who preceded her in death in 2000. Sue and Lynn lived in Chestnut Bluff outside of Halls for many years where they raised their two children, Jeff and Dawn. Both were active in Halls and the surrounding communities, as well as at Gates Baptist Church. She was also the proprietor of a beauty salon in her home for many years until she retired in 2000 to be a caretaker for her husband. Mama Sue, as she was known to so many, lived with a true servant’s heart. A talented seamstress, hairdresser and beloved grandmother and mother, she is survived by her son, Jeffrey L. Ezekiel (Laura) and Dawn Ezekiel Ray (Tom) and four grandchildren: Taylor and Jordan Ezekiel and Tripp and Zane Ray. She also leaves behind two brothers: Robert (Elaine) Lovelace of Moscow and Gene (Deeann) Lovelace of Finley. Additionally, she leaves behind her many nieces and nephews whom she treated as her own children, as well as dear friends, in-laws and cousins. She loved her family fiercely and moved to Germantown in 2015 to be closer to her grandchildren and children. A passionate Christ-follower, she attended Crossroads Baptist Church in Eads. She loved with a selfless heart and spent her time giving to others and showing her love through food, sewing, positivity and encouragement. Her favorite things on this Earth were her four grandchildren, whom she doted over and spoiled senseless. She could ALWAYS be heard cheering for her grandchildren at soccer matches, baseball, football and basketball games, as well as dance competitions and anything they were taking part in at Briarcrest and in the Memphis area. She was truly their #1 fan. When she wasn’t spending time with her family, she sewed for the Memphis Woman’s Exchange, where her handiwork has been seen on some of Memphis’ finest dressed children at Easter, Christmas and every special occasion in between. She was a fan of the St. Louis Cardinals (of which she never missed a televised game unless it was to watch her grandchildren) and Memphis Tigers Basketball. She was never at a loss for words, often doling out advice to any and all she encountered, and always told you exactly what you needed to hear, even if it wasn’t what you wanted to hear. She approached every situation with an unparalleled positivity, and truly lived by her favorite saying, “it is what it is.” A visitation for Memphis area family and friends will be held Thursday, November 11 from 5:30pm till 7:00pm at Crossroads Baptist Church, 125 Houston Levee, in Eads. Viewing will be held Friday, November 12 from 11 a.m. until 1 p.m. at Halls Funeral Home in Halls, Tennessee, with the funeral following at 1 p.m. in the chapel, and burial at South Fork Cemetery in Chestnut Bluff. In lieu of flowers, the family requests donations be made in her honor to Crossroads Baptist Church, Gates Baptist Church or Briarcrest Christian School.

The family of Barbara Sue Ezekiel created this Life Tributes page to make it easy to share your memories.

Send flowers to the Ezekiel family.